The only production by Frank Castorf that I've ever seen was Dostoyevsky's Der Spieler, which was so excruciating -- with the actors relentlessly shouting their lines (that is when they didn't forget them), belching and generally making pigs of themselves -- that I left in the interval.

So it was with some trepidation that I came to Bayreuth this year to see his new staging of the Ring, one of his very few forays into opera.

Nevertheless, if the tantalising glimpses of brilliance that characterised long stretches of Rheingold can be sustained over the next three parts, we could be in for something really special.

Of course, there are stretches, too, which don't work quite so well and where Castorf appears to lose momentum or interest.
But his main premise -- of casting Wagner's Nordic tale of gods, demi-gods, giants and dwarves as a modern-day gangster movie that combines the look and feel of Quentin Tarantino with the weirdness of David Lynch -- is surprisingly cogent.

As the curtain rises, we find ourselves not on the banks of the River Rhine, but in a sleazy motel on America's iconic Route 66. 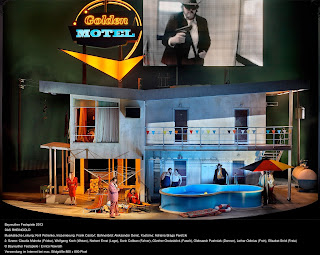 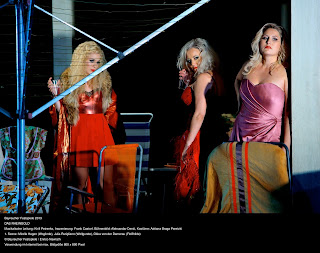 Castorf wouldn't be Castorf if he didn't have multiple video cameras placed at different vantage points around the set to project images of what's going on behind the scenes on to a giant screen on the motel's roof.

And there is so much going on all the time that is easy to get distracted from the music.

But like lots of updatings, Castorf's reading has its weak points, too.
There is a clear mis-match between the stage and what the characters are singing about.
There is no Valhalla, no Nibelheim and  no Rhinegold for Alberich to steal.

Puzzlingly, Alberich and Mime are already bound and gagged by Wotan and Loge when the latter "arrive"in Nibelheim, which is actually only a cramped caravan that Alberich calls home.

And in the crucial scene where Wotan wrests the ring from Alberich and the Nibelung utters his catastrophic curse, all three protagonists are comfortably relaxing in deckchairs.

But most of the time, Castorf's concept is intelligent and illuminating.

Sadly, the singers are another weak point.
Wolfgang Koch sings well, but with his slim, lightweight baritone, is simply miscast as Wotan.
Norbert Ernst made his name as David in Meistersinger, but hasn't the slippery wiliness that the part of Loge demands.

Martin Winkler also lacks the range and depth to really convince as Alberich.

The women fare better, particularly Claudia Mahnke, an ensemble member in Frankfurt, as Fricka, Elisabet Strid as Freia and Nadine Weissman as Erda.

The giants and the Rhinemaidens were also well cast.

Castorf and his team didn't show themselves when the curtain came down and the all-too-predictable storm of boos was unleashed.
But I think it's usual in Bayreuth for the leading team to do so only when the Ring is complete.
I can't imagine Castorf is chickening out in any way.

But the Bayreuthers have clearly fallen in love already with Kirill Petrenko, making his debut here.
I heard him conduct the by now legendary Ring in Meiningen about 10 years ago but can't, to be honest, remember much about it.

It's his first time in Bayreuth and he is clearly still finding his feet.
The prelude didn't always flow as readily as one could have hoped, but he soon picked up the tension and gave a nicely balanced reading, always attentive to the singers.
It'll be interesting to hear what he does with Die Walküre tomorrow.